Another long weekend, another excuse to go camping! The WA Day long weekend sees the introduction of winter and choosing a location means weighing up options and choosing somewhere to keep the cold at bay.

After our last effort in Balingup where we were a little too late to grab a spot at Wright’s Bridge, you may think we had intended to be at Logue Brook Dam this weekend. But no. We booked at Harvey Rainbow Caravan Park a few weeks in advance. It was the ideal location for a weekend of exploring the beautiful town of Harvey and its surrounds.

Harvey is approximately a 150km drive from Perth, so around an hour and a half. That is, unless you catch the long weekend traffic, which can add half an hour to an hour to your trip. We left from close to the city around 3:30 and arrived after 6pm.

Our mistake was going via the freeway, then exiting at Greenlands Road. If you want to try something different and avoid the traffic, jump on Albany Highway and head for South West Highway instead. We came back that way.

The holiday traffic meant it was dark when we arrived but we were still met with a friendly smile and greeting from the manager. Set up was cold and quick so it wasn’t long before we had a drink in hand and warmed up with a spicy dahl I had made in advance.

Bookings for the park are taken through the Harvey Visitor’s Centre. No online booking systems here, just good, old-fashioned over the phone country service. We called about four weeks in advance but there were still vacant bays available for the whole weekend. I thought this was surprising as Lake Brockman (and, undoubtedly, Logue Brook Dam) was fully booked and thought we would get some overflow. A few people trickled in on Saturday but the park was nowhere close to full.

Half the park is occupied by permanents, who we barely saw or heard. The camp kitchen is old but in good repair, with a TV that lets you know that AFL has priority and a lot of signs alluding to the unimpressed attitude of the park managers to the low standards of some visitor’s cleanliness.

There are numerous shady bays available, both powered and unpowered. Sites are grassed, but not thick and lush. Drinking water is freely available. Ablutions are old but functional, clean and sufficient. Although, oddly, there was no soap at the basins and the provided towel was a damp ‘no thanks’.

Aside from the communal fire, there are no facilities for your own fire. Our neighbours had brought their own fire pit, which looked wonderfully warm and we started discussing the merits of BYO firepits. A portable pot belly may be on the list of essential items in the future.

Plenty of trees and space 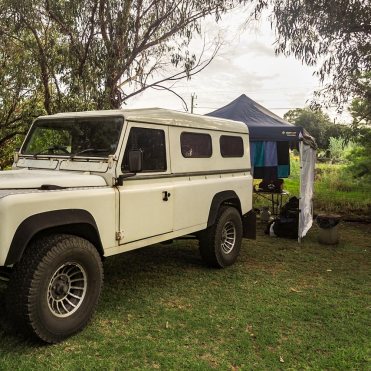 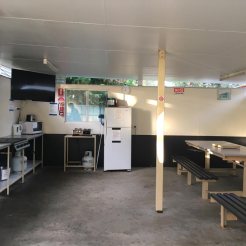 Inside the camp kitchen 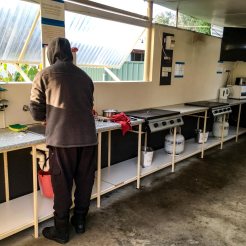 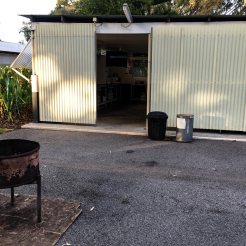 Communal fire and entrance to the camp kitchen

The park is about a ten minute walk from the town centre, which was bustling on a Saturday morning. It has cafes, a bakery, butcher and newsagency. Plus, the two stores every town needs; a Home Hardware and an IGA, which was open on Sunday.

We had decent coffee and hot chocolate at an inconspicuous cafe in town with no name. If you’re searching, it’s across the car park from the Supa IGA.

A short drive back down South West Highway from the park is Stirling Cottage Gardens. It’s a lovely site with plenty of history. The restored cottage is now a cafe kitchen, with an added balcony overlooking the Harvey River and you can freely wander through the lovely gardens. Good coffee and hot chocolates are also available here.

The Visitors Centre is also located here with plenty of warmth and information on the area. There is a lot of history in the area from the Harvey Diversion Dam to the internment camp. From the Visitor’s Centre, it is a short walk to the shrine built by Italians interned in the area during World War II. It is a thought-provoking tribute. You can collect a key from the Centre for a refundable $5 bond.

Near the turn off to town is Bizee Hands, a roadside market stall selling local crafts and produce. The BP is just across the road so drop in for fresh fruit, veg and homemade goodies before you head back. Visiting during winter means we could take advantage of the citrus fruit season. Mandarins were in stock and tasted amazing.

Who doesn’t love an oversized tribute to a town’s local industry? Harvey River Estate not only has a stunning orchard but The Big Orange, which you can climb up into and survey said orchard. A delight for small and large kids.

Attached is another delight for the big kids – a cellar door. We picked up two cartons of six bottles each of Shiraz, which is a wonderful, warming winter drop, at the bargain price of $60. The cellar door also has local art and other souvenir items for sale.

We knew Lake Brockman Tourist Park and Logue Brook Dam would be packed this weekend and were pleased with how peaceful the caravan park was in comparison. We still drove out to the Tourist Park to have a look and see if it would be something we’d try in the future. We also sampled the hot chips at the cafe, which were so good, they were possibly worth a trip from Perth.

The camping grounds were a bustling place over a long weekend. It isn’t hard to see why. Sites are covered by a beautiful canopy of trees, with many campers enjoying a warm fire. But with a lot of people there, it was a little crowded. We considered returning perhaps on a regular weekend when there would be less people.

We also drove down to Hoffman Mill, a nearby camping ground about 11km from the Lake Brockman site. The grounds are only open for camping from November through to April.  Again, it was a lovely, shaded site and had several generously-sized camping sites.

This trip differed from others as we did not do any bushwalking due to my current bout of tendinitis. There are trails in the area and the Visitor’s Centre can help with all the info. Another reason to return.

I was surprised how quiet Harvey was for a long weekend because it’s ideal. It ticks the boxes for a weekend getaway – easy distance from the city, good facilities, beautiful bush, sightseeing options and friendly locals. It’s not the glam location of Margaret River but it’s quiet and an enjoyable long weekend stay. Even if you’re only passing through, it’s worth a stop to stock up on fresh fruit or to make a winery visit.

Harvey Rainbow Caravan Park (I didn’t ask why Rainbow, but why not) is a pleasant park. It’s not a Big 4, but there’s a TV to watch the footy, a communal fire and big bays with plenty of grassed area for the kids to play. It’s close to town and to plenty of places to sightsee during the day. It’s not far from Lake Brockman and if it’s too full out there or if you simply want something a little quieter, the caravan park is the place to be. 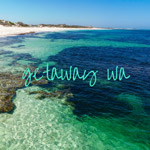 Getaway WA is a Perth-based blog by freelance writer Jo Rogers about travel and camping in Western Australia. Follow my adventures for camping tips, campsite reviews and info on well-known and more out of the way places to visit in WA.

Finally got to see Cleopatras Needles. We’d been waiting for a weekend with clear weather and it’s taken awhile. But looking back on last year’s photos, it is almost the exact same time as last year when we headed out this way (unsuccessfully - I think we saw some Snails and that was it).
Found a few Bunny Orchids in the bush nearby and on the track to the beach. Tried seeking out some Leafless and Hare Orchids today but no luck.
It’s supposed to be raining and while we’ve had patches of it, we’ve still been able to get out and about. Went for a walk along the Torpedo Trail this morning. Saw some Bunny Orchids, got a hot chocolate and got caught by a sudden burst of rain blowing through.
Lovely walk today along Lake Goegrup today - plenty of bird life and perfect weather.
One more jetty photo.
Walked through the cave at Stockyard Gully. Worth a visit if you have a 4WD to get out there. Nice drive this time of year with all the native Christmas trees in flower as well.