In the weeks leading up to Easter, I had the same conversation with several different people. When asked where we were going for the Easter break, and I replied Hopetoun, each person had the same response: ‘Where’s that?’

And, to be honest, I’m now inclined not to tell anyone because I believe it’s the best kept secret for beach holidays in WA.

Oh alright, I’ll tell you. But you have to keep it a secret. Hopetoun is approximately 575km south of Perth and around a six hour drive. Guess what? That’s about the same distance as Kalbarri.

We headed through the hills and out on Brookton Highway, passing through Brookton, Hyden and on to Ravensthorpe. We left early on a wet Good Friday, meaning nothing was open except for roadhouses and, delightfully, the Bush Bakehouse in Hyden. Prepped as always, the drive was made more comfortable with regular stops to consume hot cross buns, spanakopita and homemade protein balls (we take our travel food seriously).

Rolling into Hopetoun, we were greeted by a quaint seaside country town with wide streets, diagonal parking and a pub on the corner overlooking the ocean. We knew this was our speed. The caravan park was easy to find, tucked around the corner from the main street by the beach.

It wasn’t long before it became clear Hopetoun was the destination of choice for country folk to holiday. As people passed by, the number plates gave them away – Ravensthorpe, Kondinin, Kulin and Mandurah. Our neighbours were from West Arthur. The park was quiet, friendly and full of happy families enjoying the break.

After reading some of the reviews on TripAdvisor, I was a little uncertain about staying in the caravan park. Some were not flattering, but most complaints seemed to be about the cabins and I always take what you read on review sites with a grain of salt.

Hopetoun Caravan Park is the holiday camping accommodation from your childhood. It’s an older park with bays of all sizes and configurations protected under beach melaleucas. Management are friendly and welcoming and on arrival, they helped us to find the right spot to suit our set up.

The beach is a short walk via one of the many paths. It was a little weedy when we were there due to the recent storm but it was still good fishing and there are plenty of protected swimming spots. The town beach is a short walk along the sand or up the road. Head in the other direction for a stunning view towards East Mount Barren.

Facilities at the park are old and could do with some maintenance but everything is clean and mostly in working order. The bays] sizes are generous, showers are hot and the camp kitchen is clean. Water is available from taps around the park and fires are permitted (bring your own firewood). What more could you ask for? 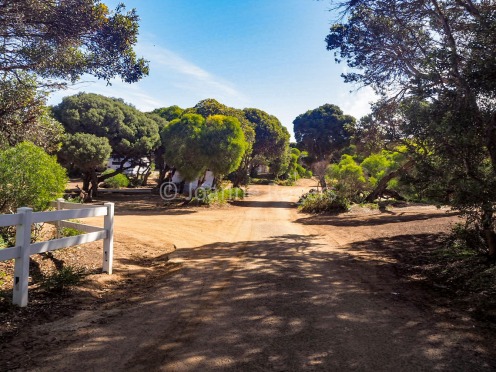 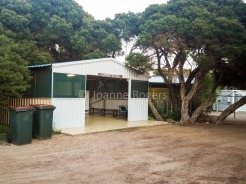 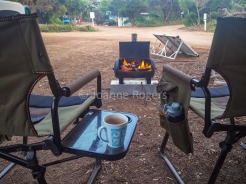 Our camp – excuse the mess!

It’s a short walk to town from the caravan park. Everything you need is there; an IGA, bakery, hardware store and cafes (put your name down at the bakery to pick up your loaf the next day).

Everything is in walking distance. Whilst the caravan park may only have a few swings scattered around, there is a great playground for the kids with a huge jumping pillow. Most importantly, the Port Hotel is on the corner, overlooking the park, where the road breaks off towards the boat launch. 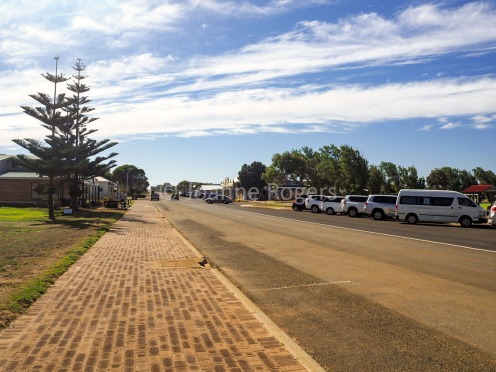 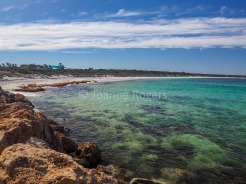 Hopetoun is a ten minute drive from the entrance to Fitzgerald River National Park. We visited 18 months ago when we stayed at Quaalup Homestead and visited Point Ann. This is a stunning piece of coastline and it was a pleasure to return and see the park from the other side.

Pro tip: If you’re an RAC member, you can get 50% off an annual parks pass. It’s worth it if you want to make multiple visits and a good excuse to visit other parks in the next 12 months.

On our first trip into the park, we made our way to East Mount Barren via Four Mile and Barrens Beaches.

At Four Mile Beach, we watched a pod of dolphins from the lookout as they leaped about and had a good time chasing their breakfast. It’s a picturesque spot with a BBQ and long drop facilities, within walking distance of the park’s camping grounds. We spoke to a couple of people who had been fishing off the beach. They had caught some herring, which was what we found to be biting from the beach near the caravan park.

Further around, we stopped at a lookout, which gave further views of East Mount Barren and Four Mile Beach below. As we traveled further into the park, the bush became more dense and with so many varieties of plants in one location, it’s hard to believe it hasn’t been professionally landscaped.

Barrens Beach is another picturesque, protected bay and would make a lovely day trip for the family. We watched some keen tourists head into the icy water for a swim. Again, the bay was surrounded by fascinating rock formations and plant specimens, with East Mount Barren looming nearby. 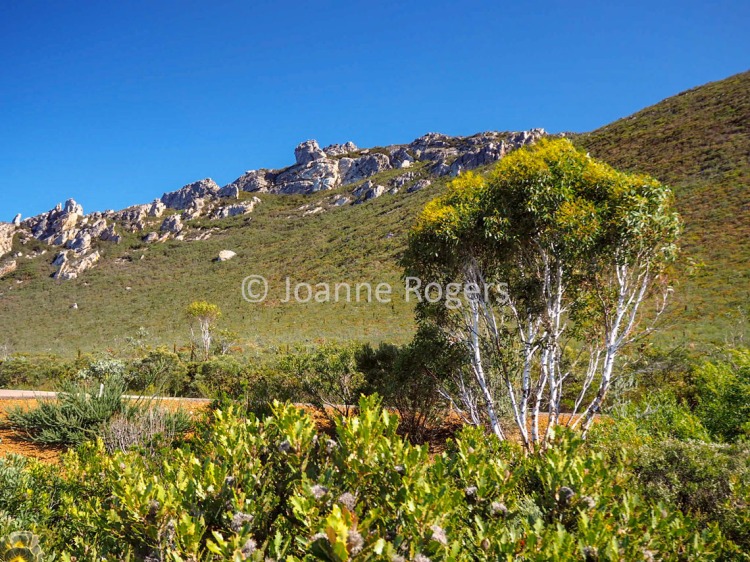 A short drive along and we arrived at East Mount Barren. The climb to the top was only 1.3km and I was expecting an upwards but easy walk to a viewing platform. Nope. The trail is rocky and unsteady under your feet. And once you get to the top of the west facing side, you realise the track keeps going and it’s taking you to the highest point. 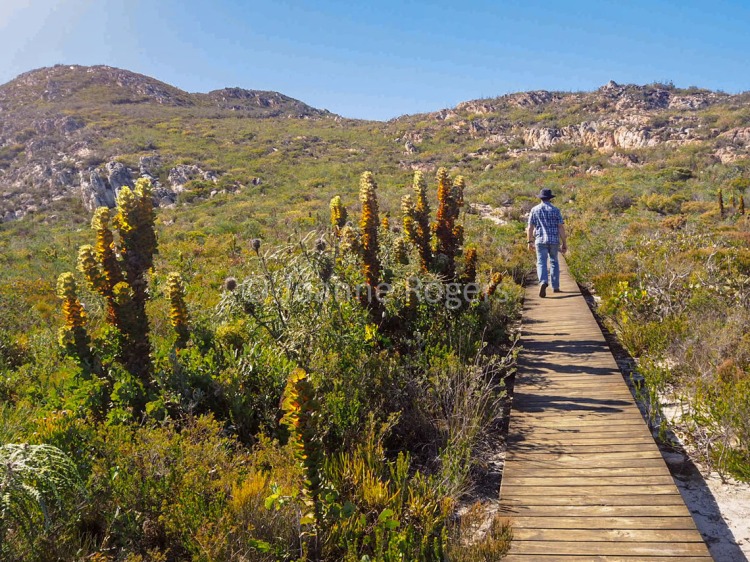 At some points the track is narrow and surrounded by scrub and there are a couple of short, narrow climbs through large boulders. This is not your usual tourist climb. There are no guard rails and some directional signs, but none telling you that straying off the path is a bad idea. And there’s no platform at the top, just some rocks to perch on. Although the trail is only short, it’s mostly upwards and long pants and sleeves are recommended. Not, as I witnessed for some people, shorts and slip on shoes (I saw one person with a nasty gash on their shin).

The view at the top is worth the effort. You are at the highest point, looking back down over Four Mile Beach and Culham Inlet and we were lucky to visit on a clear day.

I’m going to admit, I did a dumb here. I spent the previous evening taking sunset photos down the beach and forgot to adjust the settings on my camera. So the ISO was cranked high and all the shots from our walk on the trail turned out grainy and blurry. Disappointing, but I think it’s a good excuse to return one day.

The Hakea Trail is 23km long but you can choose how far and which section you would like to walk. The section from West Beach to the Headland was 7km return and just the right distance for us. Like the Mamang Trail on the opposite side of the park, the walk allows you to take in a variety of landscapes, from pounding surf and rocky beach to quiet stands of mallees. You are rewarded at the end with a breathtaking view over West Beach and Caves Point.

Check out the review (and far superior photos) of the Hakea Trail at The Life of Py. 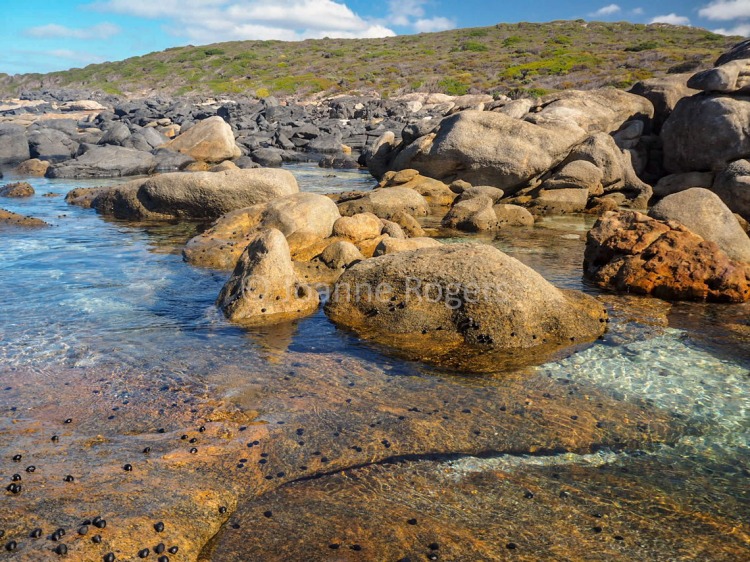 A short drive from Hopetoun are some excellent fishing and camping spots. Grab a map from the shop in town and follow the road east out to Starvation Bay, a camping and fishing spot with four wheel drive tracks taking you along the bay to sheltered fishing spots. Or check out the magnificent ocean crashing over the rocks on the opposite side of the bay.

There are camping bays available here, perfect for those who are self sufficient. Toilets (long drops presumably), BBQs, fire pits and picnic areas are available and some bays offer shade.

There were similar offerings at Masons Bay, a short drive up the road. This was another secluded location with camping facilities and close beach access. It was clean and quiet and the perfect place to set up and forget about the outside world.

We followed the road from Masons Bay to discover Masons Point, which seemed to be a local favourite for fishing. We set up and soon started reeling in the herring (and, as a surprise, a banded sweep). Some were a bit small and had to be thrown back but we caught enough for dinner. 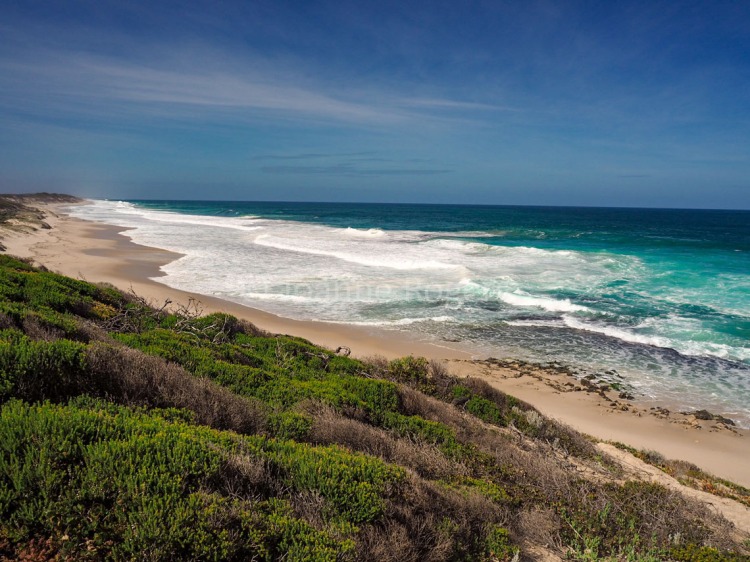 Taking the Southern Ocean Drive from town, there are several places to stop along the way to access the beach.

We thought we may find somewhere for fishing but after the recent storm, the ocean was churning and the waves smashing onto the shore. It was good for sightseeing, but less so for accessing the beach, never mind fishing.

Hopetoun is the new Kalbarri 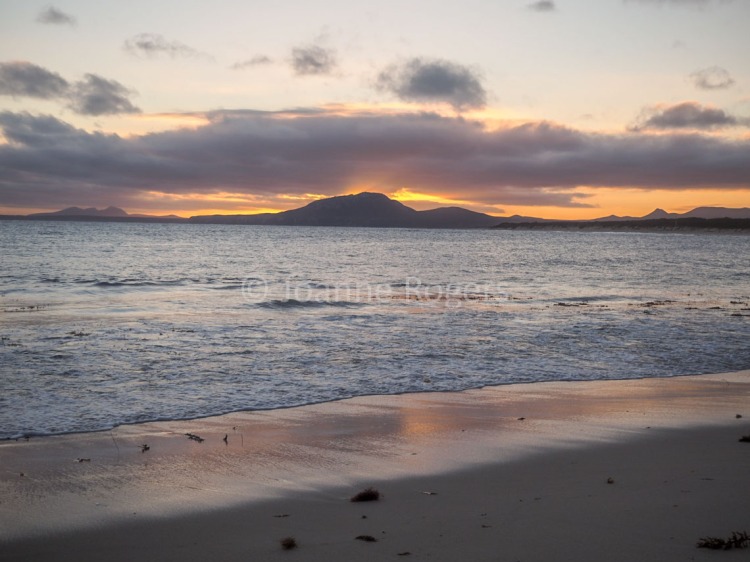 With the exception of the crowds and being a few degrees cooler, Hopetoun is similar to Kalbarri. Beachside holiday? Check. Nearby national park with spectacular views and walk trails? Check. Good fishing? Check.

This is a laidback holiday town with everything you need for a simple, seaside escape. Even at Easter, it was busy but not overcrowded and we eyed some of the holiday homes in the park with grand ideas. Perhaps another time. For now, we’d be content with another visit to this quiet pocket of WA.

Getaway WA is a Perth-based blog by freelance writer Jo Rogers about travel and camping in Western Australia. Follow my adventures for camping tips, campsite reviews and info on well-known and more out of the way places to visit in WA.

Found a few Bunny Orchids in the bush nearby and on the track to the beach. Tried seeking out some Leafless and Hare Orchids today but no luck.
It’s supposed to be raining and while we’ve had patches of it, we’ve still been able to get out and about. Went for a walk along the Torpedo Trail this morning. Saw some Bunny Orchids, got a hot chocolate and got caught by a sudden burst of rain blowing through.
Lovely walk today along Lake Goegrup today - plenty of bird life and perfect weather.
One more jetty photo.
Walked through the cave at Stockyard Gully. Worth a visit if you have a 4WD to get out there. Nice drive this time of year with all the native Christmas trees in flower as well.
Verticordia grandis in Lesuer National Park.